Celebrating 100 years of poetry on the BBC

The BBC has long been a champion of poetry, and over the last 100 years has had a major influence in both its creative evolution and its national and global promotion. For the BBC’s centenary in 2022, we have created this collection marking key moments in the story of poetry at the BBC. You can discover key milestones in poetry broadcasting across ten changing decades via our interactive timeline, as well as listening to specially selected poems from the BBC’s own historic archive.

The BBC collection is organised by decades starting from 1920 leading us up to the present. It has a plethora of poets as well as insightful expert commentary for each decade provided by our academic partner on this project, the University of East Anglia (UEA).

The additional commentary includes archive footage of video content from the BBC, links to external resources and long-form articles written in our blog pages. 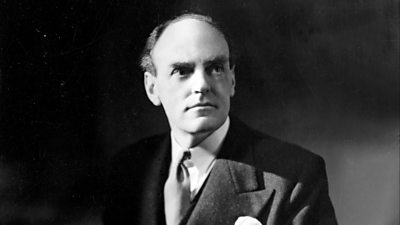 "Broadcasting is a development with which the future must reckon and reckon seriously".

When it began in 1922 few listeners can have foreseen how broadcast media would come to dominate our lives over the next hundred years.

Read more about 1920s: The Birth of Poetry Broadcasting

next to of course god america i - E E Cummings

The Waste Land Part I – The Burial of the Dead - T. S. Eliot

Modern Poetry and the Pylon Poets

In 1936 W.B. Yeats was invited by the BBC to give its 18th National Lecture, on the subject of ‘Modern Poetry’. During the broadcast he confessed that he disliked T.S. Eliot’s verse, but had ‘to admit its satiric intensity’, and acknowledge its influence on a new generation. These younger writers, such as W.H. Auden, Stephen Spender, Louis MacNeice, and Cecil Day Lewis, were sometimes known as the ‘Pylon Poets’ for the way the newly electrified landscape of Britain loomed in their verse. Yeats preferred other voices and styles, notably Eliot’s contemporary Edith Sitwell, whom he found ‘obscure, exasperating, delightful’.

Read more about the 1930s: A Newly Connected World Coronation Ode / A Prayer for the King’s Reign - John Masefield

The Hand That Signed The Paper - Dylan Thomas

Mother Among the Dustbins - Stevie Smith Still falls the Rain -
Dark as the world of man, black as our loss -
Blind as the nineteen hundred and forty nails
Upon the Cross

Sitwell's poem 'Still Falls the Rain' was written in response to the London Blitz in 1941. Most of the poems here reflect the experience of living through this dark decade.

The war renewed debate about poetry in public life. In 1941, the weekly BBC magazine The Listener asked Robert Graves (‘as a war poet’) to explain why the war had produced little great poetry so far. Because, Graves said, it was a different kind of war.

Read more the 1940s: Apocalypse and After

In 1950, the British literary magazine Nine asked its readers whether ‘the BBC and the literary periodicals are carrying out their responsibilities to poetry’. The readers replied that the BBC ‘should encourage more new poets’. The idea of the ‘new’ was a constant theme of the decade. Britain emerged from the war years with a desire for national renewal, expressed by the Festival of Britain in 1951, with its celebration of contemporary art, design and science.

Read more about the 1950s: Rebellion and Renewal A Departure from Convention

The BBC began the new decade with a new format for poetry programmes. 'The Living Poet', which ran until the early 1990s, would feature a single poet giving a recital of their poems. In 1960, this was a radical departure from convention: most poems broadcast on the BBC were read by actors, and most programmes were anthologies bringing together poems by many different poets. 'The Living Poet' realised that poets, and poetry audiences, increasingly wanted not just the poet's words, but their voice.

The Night of the Scorpion - Nissim Ezekiel

The Making of the Drum - Kamau Brathwaite

A Diversity of Voices

In the 1960s the BBC's poetry programming opened itself up to the world. In the following decade, it discovered a far greater diversity of voices within the UK itself as 'BBC English' began to venture further beyond the rule-bound respectability of Received Pronunciation.

Read more about the 1970s: History and Liberation

What the Mermaid Told Me - Adrian Mitchell

The Discovery of the Pacific - Thom Gunn

In 1978, the Poetry Society and the BBC launched the National Poetry Competition. Several of the poets featured in this section were winners in the years that followed: Tony Harrison in 1980, Carol Ann Duffy in 1983 and Ruth Padel in 1986. But poetry is hardly a competitive activity, and the poems featured in this section show the variety of voices at play in a changing Britain.

The New Rock and Roll

The 1990s was a time of youthful self-confidence in British culture. The early years saw the rise of the Young British Artists, led by Damien Hirst, and the Britpop sound of bands like Blur, Pulp and Elastica. In 1994, a younger generation of UK poets – including Carol Ann Duffy, David Dabydeen and current Poet Laureate Simon Armitage -- were widely promoted across the BBC as a ‘New Generation’, while arts journalists debated whether poetry was ‘the new rock and roll’. Poet Laureate Simon Armitage takes us on a guided tour of the BBC 100 Collection. As a new millennium began, the BBC had become a significant force in the UK poetry culture. Not only did it give a platform to poets and introduce them to new audiences; now, it created festivals and residencies, and commissioned new work. A sign of the times was the introduction of a new radio programme, The Verb, in April 2002, which continues to be presented by the poet Ian McMillan.

How we became the pirates - Kei Miller

How We Did It

There are too many brilliant poets to mention in any one gathering so for the decade of the 2010s we asked our visiting public and BBC Radio producers for their favourite contemporary poets, and we have offered examples of their work which we care for in the Archive. We hope you love exploring these poems as much as we did bringing them together.

Read more about how the BBC 100 Collection was made The Surrealists’ Summer Convention Came to Our City

The Surrealists’ Summer Convention Came to Our City - Jo Shapcott

The Battle of Maryville - Joelle Taylor

The Surrealists’ Summer Convention Came to Our City

Poet Laureate, Simon Armitage, takes us on a guided tour of the BBC 100 Collection

Looking back on one hundred years of poetry on the BBC, current Poet Laureate Simon Armitage takes us on a guided tour of our brand-new BBC 100 Collection.